What Fluids are Covered Under SPCC Regulations?

The Spill Prevention Control & Countermeasure (SPCC) regulation or 40 CFR 112 is mandated by the Environmental Protection Agency (EPA) to prevent oil from reaching oceans and adjoining shorelines. The SPCC was originally published under the Clean Water Act (CWA) in 1973 which requires oil and gas facilities to create and implement Spill Prevention, Control, and Countermeasure Plans through established procedures, methods, and equipment. The Oil Pollution Act of 1990 was created as an amendment to the CWA, requiring certain oil storage facilities to prepare Facility Response Plans in oil spill situations.

The SPCC rule currently applies to owners and operators of non-transportation-related onshore and offshore facilities that have the potential to discharge harmful quantities of oil into navigable waters and adjoining shorelines. 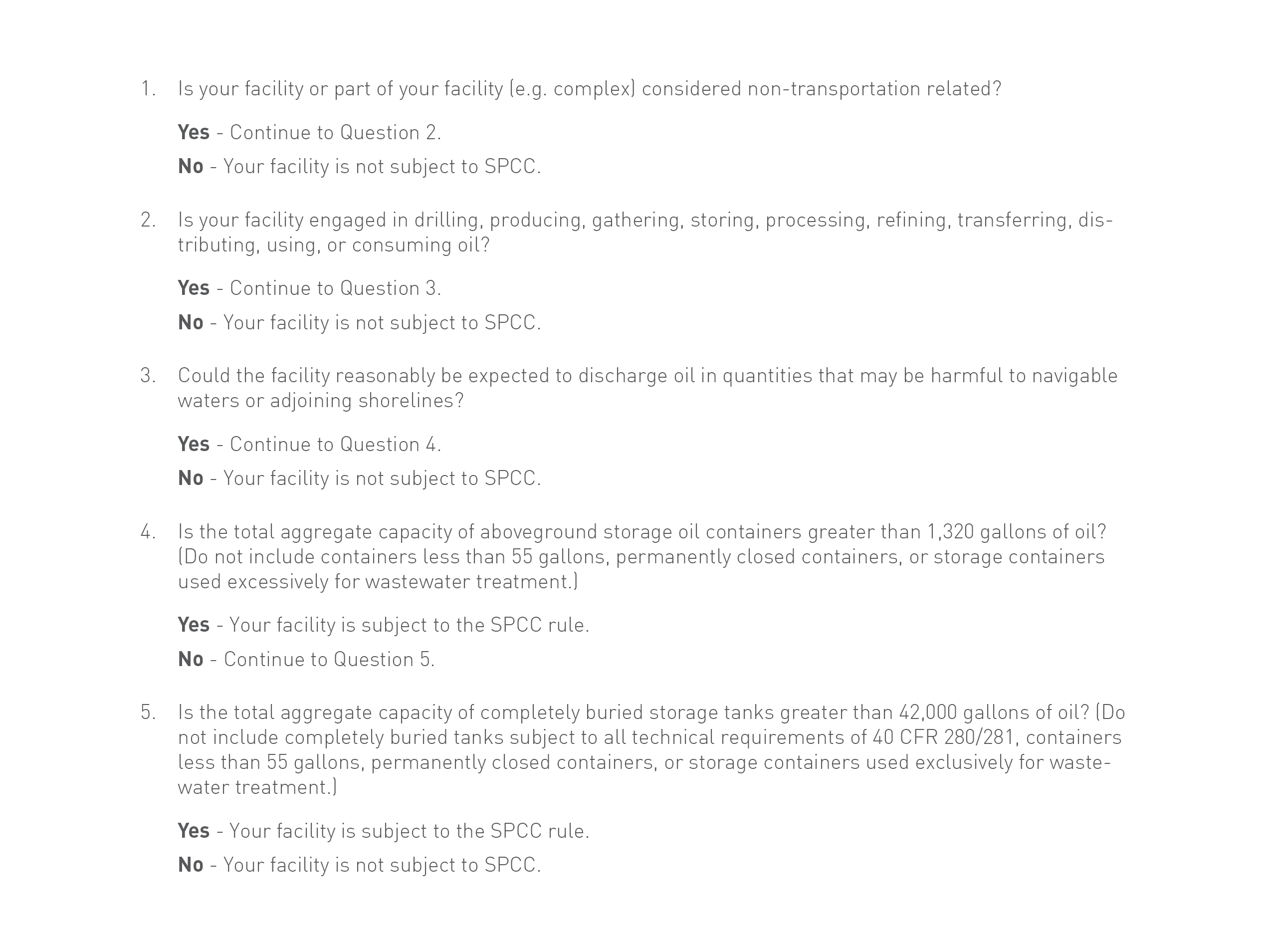 Source: Does the Spill Prevention, Control, and Countermeasure (SPCC) Rule Apply to Your Facility? | US EPA

What defines a navigable waterway under SPCC regulations?

The term Navigable Waters means the waters of the United States and territorial seas which also includes:

What fluids are covered under SPCC regulations?

The SPCC applies to both petroleum and non-petroleum oils. Petroleum oils are classified as oil of any kind or in any form, including, but not limited to, petroleum, fuel oil, sludge, oil refuse, and oil mixed with wastes other than dredged spoil. Non-petroleum oils include, and are not limited to: fats, oils, or greases of animal, fish, or marine mammal origin; vegetable oils from fruits, seeds, kernels, or nuts.

Synthetic oils are covered by SPCC regulations and are formed through the process of chemical synthesis. These oils have various purposes including use as engine fluids, heat transfer fluids, metalworking fluids, compressor and turbine lubricants, dielectric fluids, hydraulic and transmission fluids, and heat transfer fluids.

At certain temperature ranges, asphalt exhibits viscoelastic properties with viscous flow behavior and elastic deformation. Viscous flow occurs in asphalt when the effects of fluid viscosity are balanced by those arising from fluid inertia, body forces, and/or pressure gradients. Elastic deformation in asphalt references the temporary deformation of the asphalt shape that is self-reversing after removing the force or load. All types of asphalt are petroleum oil products. Asphalt cement (AC) and asphalt derivatives such as cutbacks and emulsions apply to SPCC regulations.

AC is stored at higher temperatures, making it capable of flowing due to its viscoelastic properties, and posing a risk of being discharged into oceans and adjoining shorelines.

Excused from the SPCC rule is hot-mix asphalt (HMA) and containers that store HMA. HMA is a mixture of AC and additional materials including sand, gravel, stone, or ground tires. HMA is the common component used in the paving of roads and parking lots.

Oil is often found within wastewater and originates from numerous industries such as manufacturing, pharmaceuticals, oil and gas, and food and beverage. Discharge of oil and water mixtures into the ocean is prohibited under SPCC regulations.

Produced water from oil wells is an example of Oil and Water Mixtures. A water and oil mixture is produced as a byproduct during the separation process of crude oil or gas, originating from the fluids or gases that are extracted from oil and gas reservoirs. This mixture’s physical and chemical characteristics vary due to its changing composition dependent on the amount of oil and gas present within it. These mixtures are harmful when released into navigable water and are regulated under the SPCC rule.

The containers that store produced water are also under the jurisdiction of SPCC. The oil within the container can potentially exist as free phase, dissolved phase, emulsion, or a sludge. Produced water storage containers count toward a facility's total oil storage capacity.

Hazardous substances and hazardous waste that contain oil are regulated under the SPCC rule, as are the containers that house these materials. “Used oil” falls under the Hazardous Substances and Hazardous Waste category, and refers to synthetic oil that has been used. The process of using this oil contaminates it with physical or chemical impurities.

Biodiesel and biodiesel blends are a category of renewable fuels regulated under the SPCC rule. Biodiesel (B100) is a renewable fuel for diesel engines that is obtained from natural oils such as vegetable oils or animal fats, created by combining vegetable oil or animal fat with an alcohol component such as ethanol or methanol. The combination of these substances in the presence of a catalyst creates a reaction that produces biodiesel.

What information is required when drafting an SPCC plan?

An SPCC plan must include the following information:

How often should your SPCC plan be updated?

It is standard practice to update your SPCC plan at least once, every five years. This entails a proper review on an existing SPCC plan including any revisions to facility design, or analysis of factors that could alter the facility's ability to discharge oil to navigable waterways. A revised version of the plan and the original plan itself must be certified by a Professional Engineer (PE).

How we can help

Operating with significant environmental liabilities and risks presents a constant potential for complications to arise. Don't let these dilemmas hinder your organization. Cameron-Cole's environmental experts are trained to craft solutions that reduce your risks while keeping your projects on track.